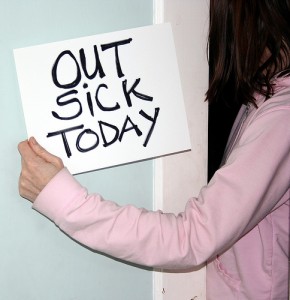 Everyone gets sick, it is just part of human nature and how life goes.  Often times that means calling into work and letting them know you can't make it.  Not a problem, you can rest and come in when you are better right?  However, are you really sick or are you "sick"?

According to a survey from CareerBuilder 30 percent of employees have called in sick when in reality they are not.

Some of the most common excuses for calling in sick are:

Other excuses that were listed, and not so traditional were:

The sick days usually start pouring in closer to the holidays, making December the most popular month to call in sick followed by July, January then February.

Wait! Before you "call in" you might want to wait and think again.  In the survey, 29 percent of employers said they have checked up on an employee to make sure that they were in fact sick.  They either required a doctor's note or called the employee themselves.  Other employers said they had fellow employees call the suspect or have driven past their house. The survey reported that 17 percent of employees have been fired for making fake excuses.

So are you still sick?

How to save money