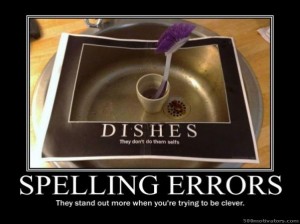 This list may sound silly, however in fact we are finding out that the majority of the English speaking population needs a refresher course. Spell check doesn't always catch these small but really big errors. So proofread your cover letter, resume, email and any other important document that you may be sending to your potential employer.

Your is possessive, showing possession, possession of something that belongs to "you."

Ex: Your shoe is untied.

You're is a contraction that is composed of "you" and "are."

Ex: You're wearing shoes that are untied.

Both: You're untying your shoes.

Their is possessive, showing possession, possession of something that belongs to "them."

Ex: That is their house.

They're is a contraction that is composed of "they" and "are."

Ex: They're building that house.

There refers to a place or idea.

Ex: That house over there is red.

All three: Their house over there is the one they're building.

It's is a contraction composed of "it" and "is."

Ex: It's hot outside.

Its shows possession of "it."

Ex: The sun with its blazing rays of heat is making the temperature hot outside.

Both: It's because of the sun with its blazing rays, that the temperature is so hot.

Lose is the opposite of win.

Ex: Man I hope we don't lose the game.

Loose is the opposite of tight.

Ex: My pants are really loose.

Both: I hope we don't lose the game because his pants are to loose.

Then is used in reference for time.

Ex: I went to the store, then I went home.

Than is used for comparison.

Ex: I'd rather go home than go to the store.

Weird is a word referring to something strange.

Ex: Her hair is weird.

Wierd is not a word.

Definitely is a word, a reassuring word.

Definately is not a word.

Effect is usually a noun.

Ex: Cause and effect.

Affect is a verb.

Ex: I was affected greatly by that gesture.

Both: The effect of his actions affected me greatly.

Whether is used when you are referencing something.

Ex: I am not sure whether or not I should bring an umbrella.

Weather talks about the weather, as in temperature etc...

Ex: The weather looks like it is going to rain.

Both: The weather looks like rain, but I can't tell whether I should wear my rain boots or not.

A lot has a space and talks about quantity.

Ex: I have a lot of homework to do.

Alot is not a word and talks about nothing.

Introverts vs. Extroverts: What jobs are you better suited for?

Top 10 ways to set yourself apart in the job search